Joint Press Release: The Launch Event of The Third National Strategy on Combating and Preventing Trafficking in Persons (2022-2026) 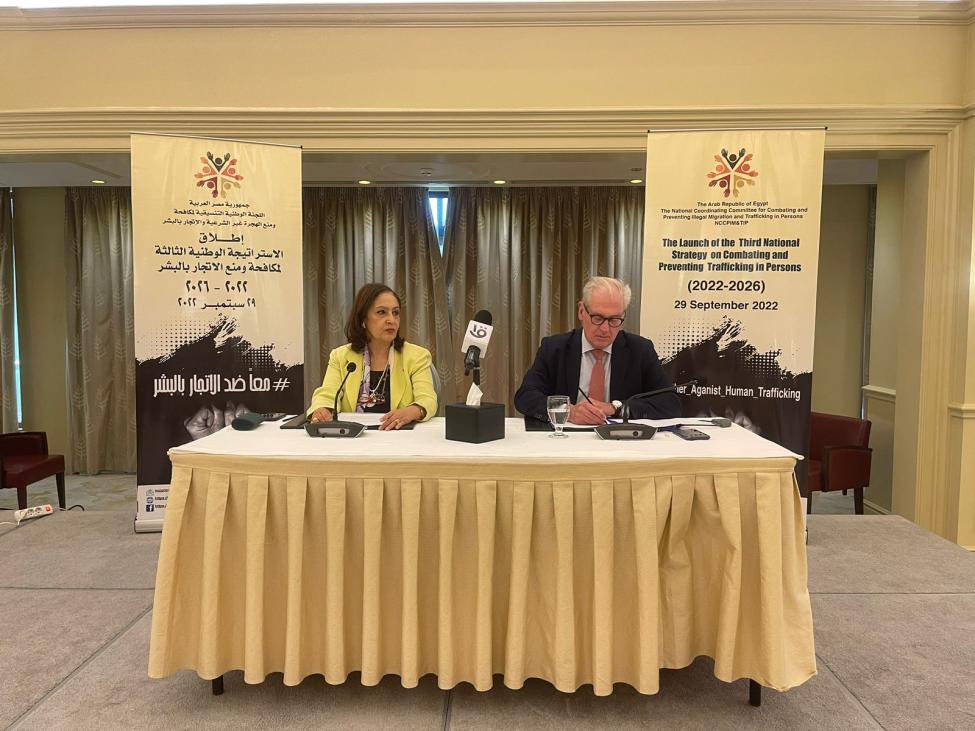 The National Coordinating Committee for Combating and Preventing Illegal Migration and Trafficking in Persons (NCCPIM&TIP), which is affiliated to the Cabinet of Ministers, launched the Third National Strategy on Combating and Preventing Trafficking in Persons for the period (2022-2026), in the presence of the NCCPIM&TIP’s members from ministries, national entities and national councils concerned with combating the crime of trafficking in persons, in addition to the presence of representatives of international organizations, civil society organizations and foreign embassies in Cairo.

Ambassador Naela Gabr, Chairperson of NCCPIM&TIP, stated that the Egyptian state pays a great attention and significant importance to trafficking in persons crime, which is one of the most important challenges facing not only the victims, but the international community as a whole. She added that "The New National Strategy is a new chapter of the national will that is determined to confront this heinous crime, as it aims to continue developing the performance in reaching the best results to serve the Egyptian citizens and society as a whole, to prevent individuals from falling prey of any form of exploitation. It is a starting point and the beginning of new action plan in which we build on what was achieved upon the completion of the previous National Strategy (2016-2021)."

Ambassador Gabr also referred to the most prominent achievements during the past National Strategy (2016-2021), and the most important milestones it included when it comes to protection measures, capacity-building, national and international cooperation, in addition to the annual celebration of the World Day against Trafficking in Persons and the launch of the national media campaign "Together Against Trafficking in Persons". Gabr stated that NCCPIM&TIP is keen on advancing the ongoing coordination and communication with the relevant national entities to ensure the achievement of the desired outcomes, besides NCCPIM&TIP’s close cooperation with various UN organizations operating in Egypt.

In reference to the Third National Strategy on Combating and Preventing Trafficking in Persons (2022-2026), Ambassador Gabr indicated that NCCPIM&TIP’s Technical Secretariat relied on the expertise it had accumulated since 2007 and the experiences it had undergone during the past years, which refined national capacities until the Third Strategy came in action befitting Egypt's role and position, at the regional and international levels. The National Strategy has followed the international scientific approach in the field of combating trafficking in persons, which is the four pillars’ approach “4Ps” (Prevention, Prosecution, Protection, and Partnership), which makes the strategy an effective tool in the hands of the government to protect individuals and the community as a whole.

As confirmed and stated by Mr. Laurent De Boeck, Chief of Mission to the International Organization for Migration (IOM) in Egypt, “I would like to congratulate Ambassador Naela Gabr for her role in coordinating all parties concerned with countering and preventing the crime. The comprehensive strategy and plan of actions is key to pursue our collaboration.

IOM seeks to strengthen its partnership with all relevant actors and continue working with NCCPIM&TIP to effectively combat the crime. It is important to share and leverage our joint knowledge, resources and assets which will help overcome obstacles to reaching people in need; and builds resilience.  We look forward to joining efforts in executing the New Third National Strategy for combatting trafficking in persons and achieving sustainable development.”

During the launch event, a short video of the previous Strategy’s achievements was presented, followed by a brief presentation by members of the Technical Secretariat of NCCPIM&TIP’s Counter Trafficking Unit about the main objectives and activities of the new Strategy in light of the international approach to combating trafficking in persons, which addresses the four key pillars.

The launch event was organized in collaboration with IOM Egypt and with the generous contribution of the EU within the framework of the Regional Development and Protection Programme (RDPP) project.