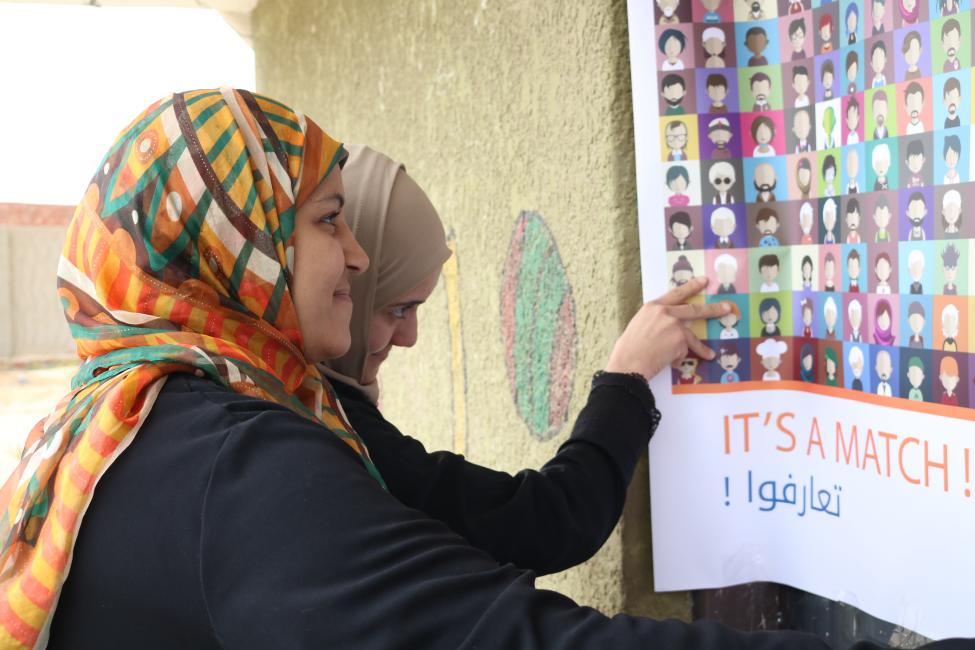 Cairo, 29 February 2016 – “It’s a Match!,” a click-funding campaign promoting social cohesion among migrants and their host communities in Egypt initiated by IOM Egypt in partnership with award-winning innovators Bassita, has gone viral and reached its target in less than two weeks.

The campaign’s video has been met with very positive reactions with more than 80,000 views on Facebook and 12,000 views on YouTube in just 13 days. Glowing comments on social media included “The idea is beyond wonderful, I hope you repeat it in other fields and we will always support you,” “Finally something creative.”

The campaign uses gamification to promote mutual understanding and cooperation between Syrians and their Egyptian host communities in order to break down social barriers in one of Cairo’s outer neighbourhoods. It also aims to create a positive economic impact through injecting liquidity and stimulating demand for the neighbourhood’s local businesses.

The campaign provided 1,000 halved coupons to 500 migrants and 500 Egyptians.  Egyptian participants had to find their “match” in a migrant counterpart, be introduced and take a selfie together in order to be able to redeem the coupons. The project was made possible with the generous support of the US Bureau of Population, Refugees, and Migration (PRM).

“Thoraya moved to the neighbourhood a few years ago when violence surged in Syria. We have been neighbours for the past 3 years. We used to greet each other whenever our paths crossed. “It’s a Match!” encouraged us to actually start a conversation and exchange phone numbers. We loved the idea and we have met twice since then so that our kids can play together,” said one of the Egyptian beneficiaries.

On teaming up with Bassita, IOM Egypt representative, Roberto Cancel said, “IOM Egypt is exploring innovative ways to engage new development partners including the private sector. In particular, IOM was interested in Bassita’s pioneering concept of “clickfunding” as it engages youth and private sector as drivers of social change in a sustainable and mutually beneficial way.”

The campaign is part of a more extensive programme falling under the Regional Refugee and Resilience Plan for Syria (3RP) which also aims to provide social assistance to Syrians and host communities in order to improve living conditions, resilience, and social cohesion, and ultimately to prevent irregular and unsafe migration.