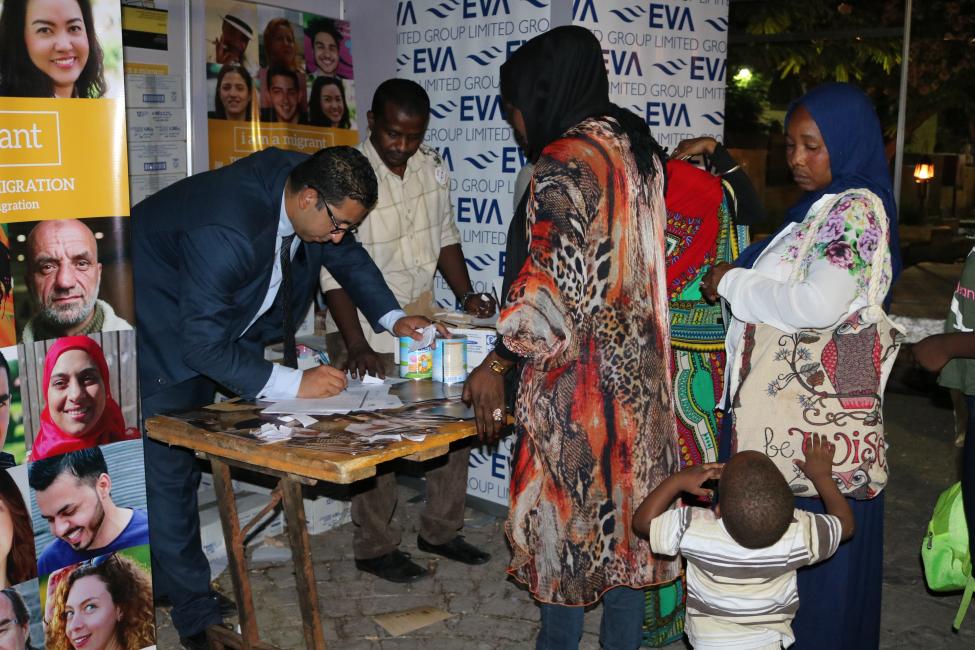 In collaboration with the National Coordination Committee for Combating and Preventing Illegal Migration and Trafficking in Persons (NCCPIM&TIP), IOM hosted a reception to mark the World Day against Trafficking in Persons at the premises of the State Information Services. The event was attended by officials representing the United Kingdom Embassy in Egypt, and USAID among others.

Opening remarks were delivered by the host, Mr Diaa Rashwan, Head of the State Information Services, Ambassador Naela Gabr, Chairperson of the National Coordinating Committee for Combatting Illegal Migration and Trafficking in Persons, Dr Maysa Shawky, Head of the National Council for Childhood and Motherhood (NCCM) and Mr Amr Taha, Head of IOM’s mission to Egypt.

In his opening remarks, Amr Taha highlighted that in 2010, IOM worked with the Government of Egypt to issue the first law on counter trafficking in the entire MENA region. He added, “Since then, we trained hundreds of officials. Today is also a day to commend Egypt’s progress in fighting human trafficking.”

“One of NCCM’s main achievements in the field of counter trafficking is the establishment of the first regional female shelter for victims of trafficking in collaboration with IOM in December 2010. Another shelter for Egyptian and non-Egyptian VoTs is currently being established in collaboration with the Ministry of Social Solidarity,” said Dr Shawky, who also stressed on the importance of providing rehabilitation services and social and psychological support to VoTs.

The event featured short awareness raising videos on different forms of trafficking in persons, a performance by Metobus children’s group and a reception.

In the afternoon, IOM organized a community event for migrant and Egyptian communities to mark the Day in collaboration with Tadamon at the Children Park in El-Sayeda Zeinab.

The event brought together more than 1,000 Egyptians and migrants mainly from the Sudanese and Yemeni communities. It featured information stands from IOM, the National Council for Childhood and Motherhood, Egyptian Red Cross and Tadamon, theatre performance, health awareness sessions as well as various activities for children such as an educational puppet show and face painting.

IOM also collaborated with AfriCairo, a pan-African musical group, who performed a song specifically dedicated to raising awareness about the issue of trafficking in persons.

The event was supported by Eva Pharma, one of Egypt’s major pharmaceutical companies, which provided baby milk for new-borns in need of formula milk up to the age of 36 months.

The events were made possible with the generous support of the European Union, US Bureau of Population, Refugees, and Migration, USAID, and the Ministry for Foreign Affairs of Finland.