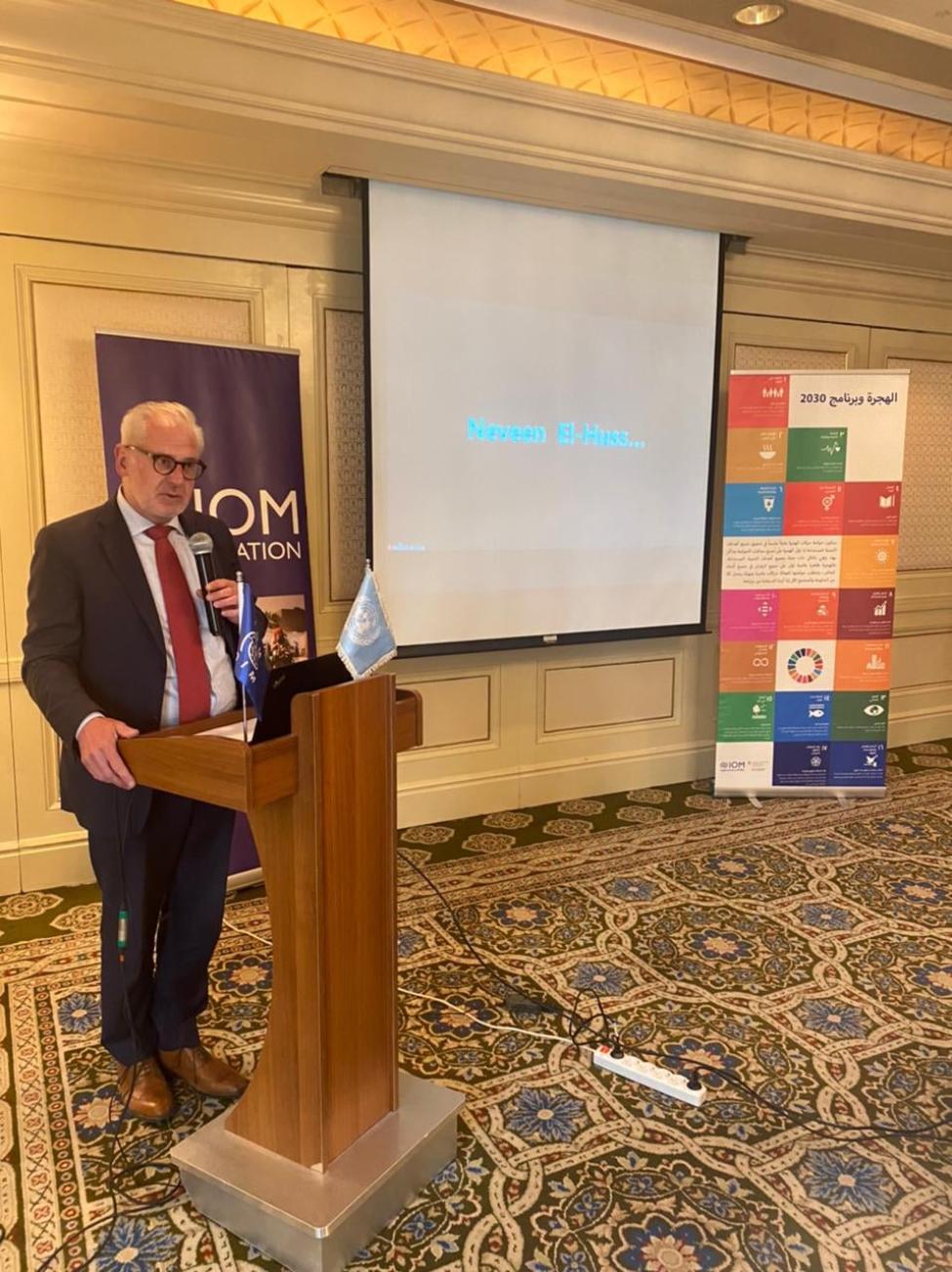 The International Organization for Migration (IOM) announced that the current number of international migrants residing in Egypt has reached a total of 9 million migrants and refugees.

IOM considers a migrant to be “any person who is moving or has moved across an international border or within a state away from his/her habitual place of residence, regardless of (1) the person’s legal status; (2) whether the movement is voluntary or involuntary; (3) what the causes for the movement are; or (4) what the length of the stay is”.[1]

In its latest assessment of migrant stocks in Egypt, IOM revealed that the current number of international migrants residing in Egypt is 9,012,582 migrants, which is equivalent to 8.7% of the Egyptian population (103,655,989).[2]

This migrant population consists of people originating from 133 countries, among whom the biggest groups are Sudanese (4 million), Syrians (1.5 million), Yemenis (1 million) and Libyans (1 million). These four nationalities constitute 80% of the international migrants currently residing in the country.

There is a notable increase in the number of migrants stock since 2019, due to protracted instability in the neighbouring countries of Egypt, that have driven thousands of Sudanese, South Sudanese, Syrians, Ethiopian, Iraqi, and Yemeni individuals to find refuge in Egypt.[3]

The Government of Egypt positive discourse towards migrants and refugees may be seen as a pull factor for the recent migrants, refugees, and asylum seekers flows.[4] Egypt has been generous in including migrants, refugees and asylum-seekers in the education and health national systems, including on equal footing with Egyptians in many instances and this, despite the challenges these two sectors are facing and the high economic costs. The inclusion of migrants’ population in the national COVID-19 vaccination plan is a clear recent example on the Government of Egypt approach in treating migrants, as equal as Egyptian citizens.[5]

The analysis shows that the average age of the majority of migrants is 35 years old with a balanced percentage of males (50.4%) and females (49.6%), with a majority of them (56%) residing in five governorates: Cairo, Giza, Alexandria, Damietta and Dakhaleya. The rest of the migrants live in governorates, such as Assiut, Aswan, Gharbiya, Ismailia, Luxor, Marsa Matruh, Menoufiya, Minya, Port Said, Qaliuyiba, Qena, the Red Sea Governorate (Hurghada, Sharm Al-Sheikh with small numbers in Sinai Peninsula, specifically Dahab city), Sharqyia, Sohag and Suez.

Also, the data collected from embassies and IOM studies reveal that more than one third of the population (37%) are working in stable jobs and businesses, indicating that migrants in Egypt are positively contributing to the labour market and the Egyptian economic growth. For instance, Syrians who constitutes 17% of international migrants’ stocks in Egypt, are one of the top nationalities contributing positively to the labour market and the Egyptian economy. It is estimated that the amount of funds invested by 30,000 registered Syrian investors in Egypt is approximately 1 billion dollars[6]. This reflects the importance to enhance the integration of migrants to positively impact their host society.

The analysis of the duration of stay of migrants in Egypt demonstrates that 60% of those international migrants living in Egypt are well integrated for more than 10 years (5.5 million persons), with 6% integrated for 15 years or more (second generations included).

This assessment allows IOM to review its latest assessment on the migrants’ stock in Egypt conducted in 2019. It helps the Organization to plan its responses to the actual needs of the migrants residing in Egypt. Moreover, it highlights the importance to better understand the differences between those migrants who reside for years and generations (between 11 to 15 years) in the country and integrated the Egyptian society while contributing to its growth, from those international migrants in need of support. Based on its daily assessment of migrants’ needs, IOM estimates, through sampling analysis, that 15% of the international migrants in Egypt (between 1,1 to 1,300,000) can be considered as “vulnerable” migrants or persons of concern to IOM who may be in need of tailored assistance. Such vulnerability has been exacerbated by the recent COVID-19 pandemic hitting the informal market for both migrants and Egyptians. IOM support includes cash-based interventions, housing subsidy, food and non-food, education and health assistance.

IOM Egypt started its assessment in October 2021 which was concluded with concrete quantifiable and qualifiable results in June 2022. IOM has used multiple research methods to get the most accurate number and profile of migrants in Egypt. The surveys were done through consultations with diplomatic representations of more than 100 countries present in Egypt, coupled with migrants’ focus groups, surveys among 63 community leaders, as well data collected by the Organization through its daily interaction with migrants, academic desk review of available data on migrants’ stocks in Egypt and past IOM empirical studies. IOM collected information on the number of international migrants in Egypt, disaggregated by gender, age, location, duration and purpose of stay, as well as work status.

The result of the most updated analysis is available on the website: bit.ly/3QgOKNk

The Government of Egypt embodied in the Ministry of Foreign Affairs jointly with IOM continuously develops a series of mechanisms and support to ensure the protection needs of migrants and to capitalize on the development potential of migrants in Egypt.

It is worth to note that IOM policies and programmes consider human mobility as a source of prosperity and sustainable development for countries of origin and hosting communities. IOM Egypt closely works with the Government of Egypt on creating legal pathways and better economic alternatives for Egyptian youth as a way to combat irregular migration. In 2020, the Government of Egypt in coordination with IOM, the International Labour Organization and GIZ, launched “Towards a Holistic Approach to Labour Migration Governance and labour Mobility in North Africa (THAMM)”, a European-Union funded programme which works on identifying the regulatory framework of the recruitment of Egyptian workers in international markets. Additionally, the Y-MED Progamme (since 2019) jointly managed by IOM, the Governments of Egypt and Italy, provides internships and apprenticeships for Egyptian youth in automation and hospitality to upscale their skills and fit the international labour market.

Furthermore, IOM Egypt has cooperated with youth non-governmental organizations, in close coordination with the Ministry of Youth and Sports, to create more than 100 environmentally friendly livelihood opportunities in Cairo and Alexandria, such as recycling, waste management, green enterprises and hydroponic farms.

[4] H.E President Al-Sisi repeatedly stressed on Egypt’s unwillingness to have refugees camps on it’s territory and confirmed that refugees are living normally among Egyptians without any kind of discrimination, Retrieved from State Information Service (SIS), (2016), Accessible here

[7] ("Minister of Emigration and Egyptian Expatriates’ Affairs: "The number of Egyptians abroad is approximately 10 - 14 million", 2022)