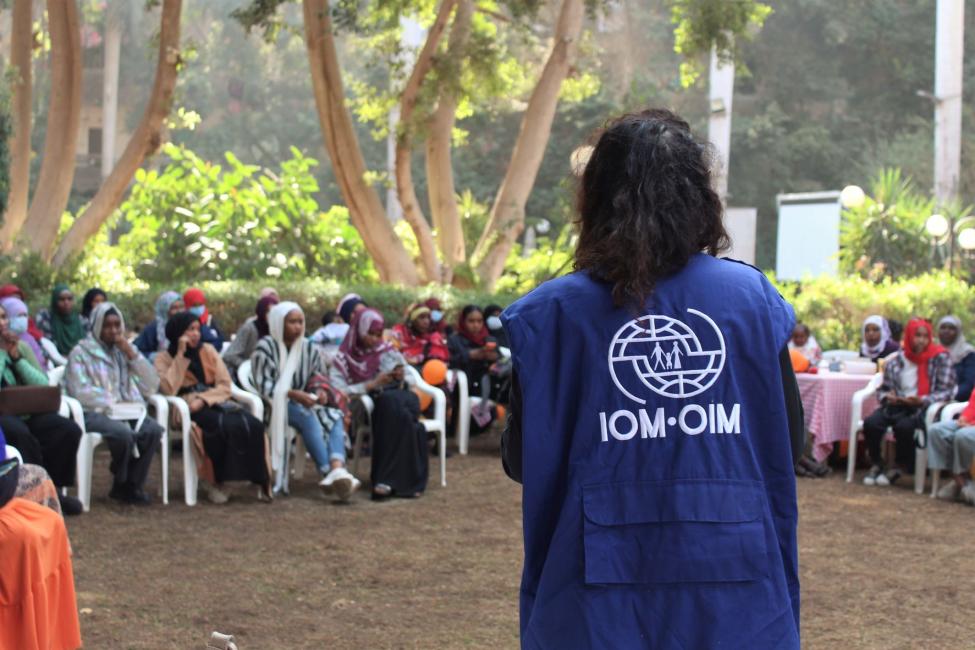 Cairo - On Thursday 1 December 2022, IOM Egypt commemorated the International Day for the Elimination of Violence against Women as part of 16 Days of Activism by throwing an event for women and their families from Sudan, South Sudan, Eritrea and Yemen in Cairo.

At the event, sessions were given by IOM Egypt staff on IOM services including a legal awareness session and a session on mental health and psychosocial awareness. As 1st of the December also marked World Aids Day, IOM medical personnel gave a session on HIV/AIDS and sexually transmitted infections.

UN Women Egypt and MSF also participated in the event and gave awareness sessions on Violence Against Women and Post-Exposure Prophylaxis (PEP) Kits.

While the women attended the sessions, their children were engaged in various activities organized by the Scouts such as face painting, games, and races.

On the occasion of the 16 Days of Activism, IOM Egypt Chief of Mission, Mr. Carlos Oliver Cruz, highlights, “The needs of women and girls continue to climb. IOM works tirelessly with partners to preserve the safety, well-being and dignity of women and girls, and we are pleased to reaffirm our commitment again this year to systematically address all forms of violence against women and girls.”

The 16 Days of Activism against Gender-Based Violence is an annual international campaign that kicks off on 25 November, the International Day for the Elimination of Violence against Women, and runs until 10 December, Human Rights Day. Every year, the UNiTE Campaign focuses on a specific theme. This year’s theme is “UNITE! Activism to end violence against women and girls” and invites everyone to play their role in ending violence against women and girls, show support and solidarity to women’s rights activists and to resist the rollback on women’s rights.

This event was generously funded by the EU and the Governments of Finland, Italy and the Netherlands.

For more information about the campaign, please go to: https://www.unwomen.org/en/what-we-do/ending-violence-against-women/unite/theme