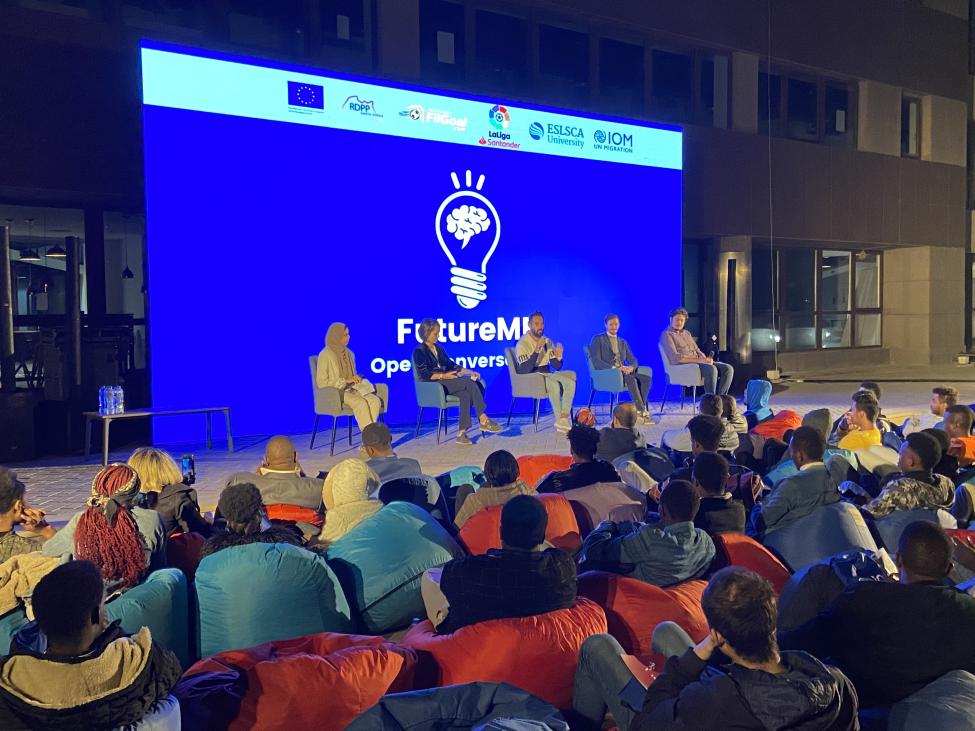 Cairo – The International Organization for Migration (IOM) Egypt jointly organized the first series of “FutureMe: Open Conversations” at ESLSCA University, located in the New Giza area of Cairo. The event brought together 64 Beneficiaries from Egypt, Syria, Sudan, Eritrea and Ethiopia as well as representatives from the European Union (EU) delegation, Spanish, Chilean and Peruvian Embassies as well as UNHCR representatives.

Thanks to the generous contribution of the EU, IOM Egypt through the Regional Development and Protection Programme in North Africa (RDPP II) implemented the activity titled “FutureMe: Open Conversations”, in partnership with La Liga, ESLSCA University, FilGoal, and Yussef Ayman – a football freestyler and content creator.

IOM successfully held the first event of the series on the themes of the Football and Entertainment Industry. 64 attendees from migrant and Egyptian backgrounds attended a panel discussion, played interactive games, and came together for a watch party. The panel discussion was moderated by IOM and the panellists included: Zakaria ElSaeed – an Egyptian journalist from FilGoal-, Raul Ostale – La Liga Delegate in Egypt, Sudan, and Libya-, and Yussef Ayman – a football freestyler and content creator.

The activity promoted community cohesion between migrant communities in Egypt and aimed to inspire and empower migrant and Egyptian youth to expand their perspective on different career paths. Throughout the event, key messages of equal opportunities, tolerance, and cohesion were practiced and disseminated.

Raul Ostale, La Liga Representative said "Community cohesion, diversity, and integration are fundamental. Living outside your country and working in an international environment makes it necessary to accept and value different cultures. The important thing is to be able to look beyond and connect with people on a one-to-one basis. It is something worth fighting for and that allows us to connect with our true humanity. We are all human beings in the end."

Dejan Micevski, Deputy Chief of Mission of the International Organization for Migration added from his side "Football has been globally recognized and documented as a positive and engaging avenue to promote social cohesion between different groups. Such platform allows for social contact to be fostered and promoted in a healthy and meaningful manner. In today’s increasingly urbanized and individualized life, it is important to recognize spaces which allow for and promote increased interaction and cross-cultural exchange."