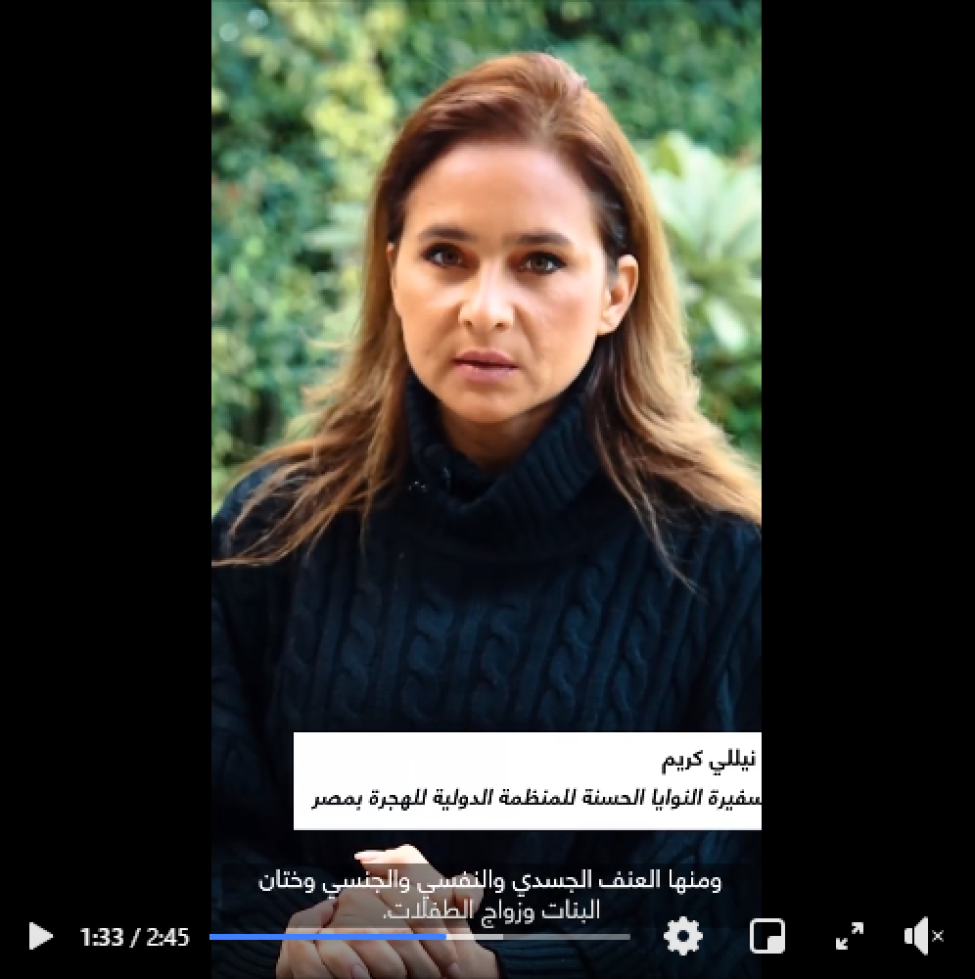 Cairo, 25 November 2020 – Since the outbreak of COVID-19, emerging data and reports have shown that all forms of violence against women and girls, particularly domestic violence, has intensified. Even before COVID-19, violence against women was one of the most widespread violations of human rights, with one in three women worldwide experience physical or sexual violence mostly by an intimate partner.

According to a UN Women study conducted in nine Arab States countries during the pandemic, about half of the respondents agreed that women are currently facing increased risk of violence from their partners because of COVID-19, with less than 40 per cent of women who experience violence seeking help of any sort or reporting the crime. The study also found that nearly one in three respondents (men and women) at least considered that women should tolerate violence during the COVID-19 pandemic to keep the family together. According to UNFPA, globally, two  million Female Genital Mutilation (FGM) cases could occur over the next decade that would otherwise have been averted and an additional total 13 million child marriages taking place that otherwise would not have occurred between 2020 and 2030 due to  pandemic-related disruptions.

In response to the issue and supported by the United Nations, renowned advocates from across the Arab States region have joined forces to produce a public service announcement video to raise awareness about the increase in violence against women and girls during the COVID-19 pandemic.

The video starts with a dramatized video call where an unidentified woman experiencing domestic violence asks her friend to help her call a hotline using a coded message as she fears being overheard by the perpetrator. The call is followed by advocacy messages and a call to action for the viewers to support survivors of violence. The clip, shared via social media and messenger apps, includes a link to a website with information and resources, such as hotlines and shelters, available for women and girls who experience violence in the region.

Launched on occasion of the International Day for the Elimination of Violence against Women, celebrated globally on 25 November and followed by the global campaign on the 16 Days of Activism against Gender-based Violence, the video production was  led by UN Women and WFP together with FAO, UNAIDS, UNFPA, UNODC, and WHO.

The 16 Days of Activism against Gender-Based Violence is an annual international campaign that kicks off on 25 November, the International Day for the Elimination of Violence against Women, and runs until 10 December, Human Rights Day. Started by activists in 1991, the campaign is used as an organizing strategy by individuals and organizations around the world to call for the prevention and elimination of violence against women and girls.

This year, the UN system celebrates the campaign under the global theme: "Orange the World: Fund, Respond, Prevent, Collect!"

For additional information on signs of relationship abuse and how to help, please check out this page.