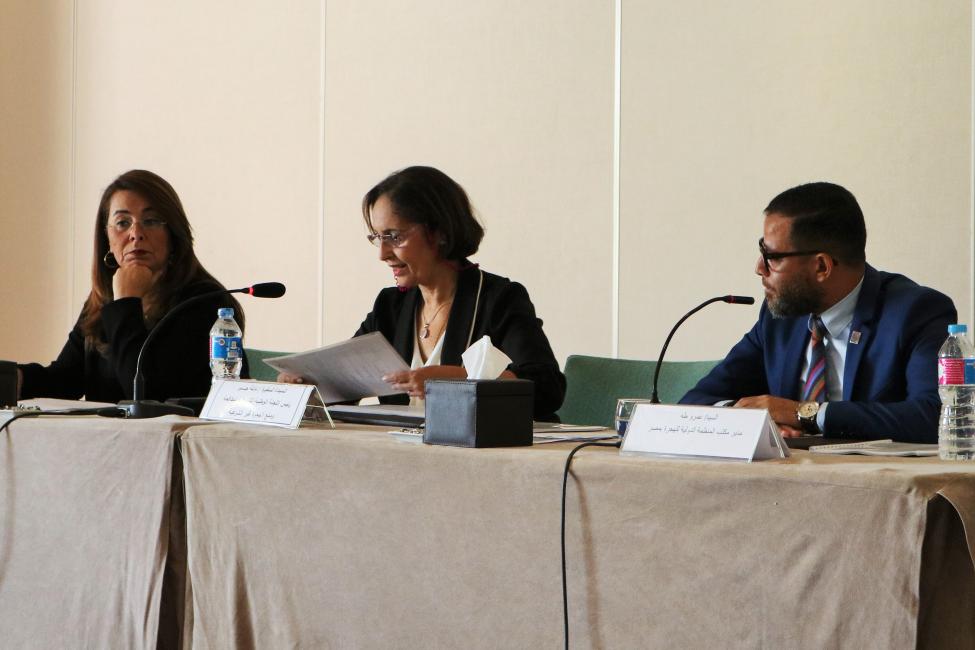 Cairo, 17 October 2016 – The Government of Egypt launched a new “National Strategy on Combating Illegal Migration” for 2016-2026 under the auspices of H.E. the Prime Minister with IOM’s support.

H.E. Minister of Social Solidarity, Ghada Waly, opened the launch event as a keynote speaker on behalf of H.E. the Egyptian Prime Minister commending the work of the National Committee for Combating and Preventing Illegal Migration (NCCPIM) in laying the necessary foundation for a comprehensive national policy on addressing irregular migration that paved the way for the launch of the Strategy.

The Strategy provides the overall institutional framework for the Egyptian government to counter the smuggling of migrants and to ensure the protection of vulnerable migrants in Egypt.

Speaking at the launch event of the Strategy, NCCPIM Chairperson, H.E. Amb. Naela Gabr, emphasized that irregular migration is a phenomenon that needs the concertion of the national and international efforts in order to address the root causes and provide viable alternatives.

The 2016-2026 Strategy includes an Action Plan for implementation of the next two years as well as monitoring tools based on objectively verifiable key performance indicators; the Action Plan will be updated bi-annually. The Strategy was developed under the lead of NCCPIM with technical support on strategic planning methods from IOM.

“I am pleased to give my first speech today when IOM is a UN-related organization. The Strategy and its Action Plan provide a comprehensive tool to curb irregular migration, to protect vulnerable migrants and to prosecute smugglers and their networks” highlights Amr Taha, IOM Egypt Head of Office. “IOM will continue to support the Government of Egypt to implement the Strategy to counter irregular migration from, to and through its territory.”

Assistant Deputy Minister of Foreign Affairs for Migration, Refugees and Combatting Human Trafficking, H.E. Amb. Mohamed Ghoneim, recalled the importance of continued dialogue between both sides of the Mediterranean to address the phenomenon of irregular migration. H.E. called for a genuine partnership that would benefit both sides and migrants alike.

The Strategy is supported under a regional IOM project: “Addressing irregular migration flows and upholding human right of migrants along the North-Eastern African Migration Route and North Africa – NOAH”, funded by the US State Department’s Bureau of Population, Refugees, and Migration (PRM).

The Strategy confirms Egypt’s obligations under international, regional and national priorities. It is an integral part of IOM country strategy which provides the framework for cooperation with the Government of Egypt in achieving the Sustainable Development Goals through which migration has been mainstreamed, including target 10.7 on good migration governance, as well as Egypt’s own Sustainable Development Strategy as providing alternatives to irregular migration is central to the new Strategy and Action Plan.