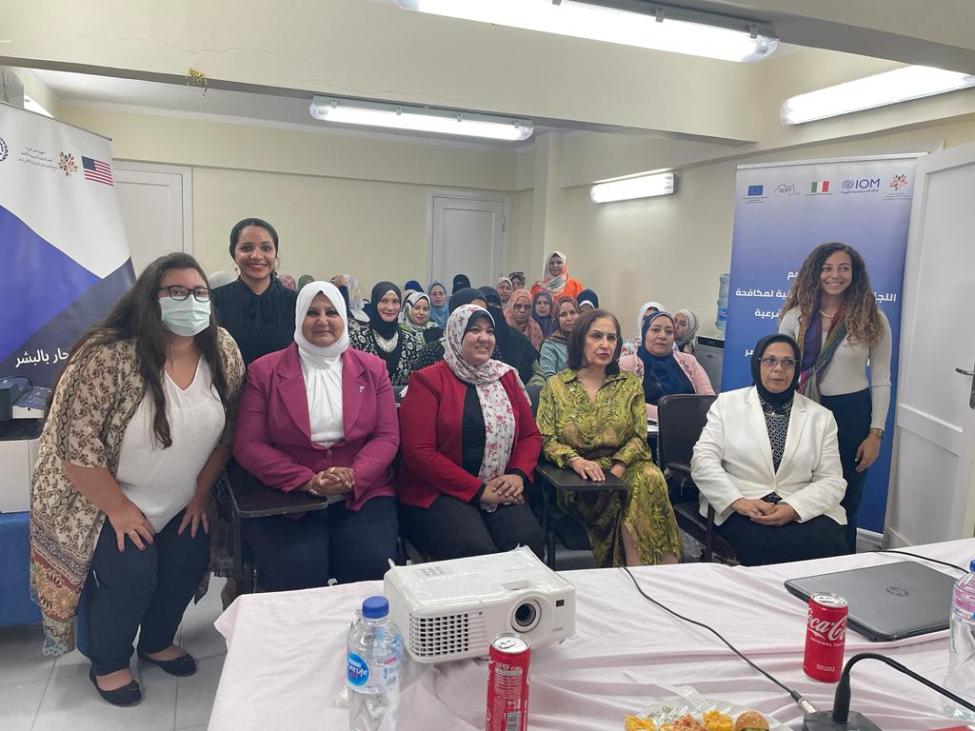 Alexandria- 21 September 2022- In light of the cooperation between The National Coordinating Committee for Combating and Preventing Illegal Migration and Trafficking in Persons (NCCPIMTIP) and the Ministry of Social Solidarity (MOSS) in defining the crime of trafficking and its forms, and the existing national referral mechanism to provide protection to victims of trafficking, and based on the National Committee’s belief in the importance of raising awareness; highlighting the role played by social women leaders in Egypt, the Committee, in collaboration with the International Labor Organization (ILO) and the International Organization for Migration (IOM), held the first awareness raising session in Alexandria to 30 women on “Raising the awareness of social women leaders on responding to victims of trafficking”. This session is supported by the US State Department under the project ”Combating Human Trafficking in Egypt”, as well as the European Union through the “Regional Development and Protection Program (RDPP)” project.

Ambassador Naela Gabr, Chairperson of NCCPIM&TiP, delivered a session on the prominent role that social women leaders play in raising awareness on women’s issues, especially on economic empowerment, family planning, technical and vocational education and promoting the domestic workers’ contract.  Gabrr emphasized the definition of the trafficking crime and its forms, addressing mechanisms for providing protection and care services to victims and creating opportunities for them to facilitate their reintegration into society. This is to avoid them falling preys to exploitation once again.

Mrs. Jacqueline Mamdouh, Director General of the General Department of Women Affairs at MOSS, stressed that Egyptian women are amongst the most important groups prioritized by the Ministry in all its programs. She mentioned that social women leaders play an essential role in addressing national issues and added that the Ministry has centers for hosting and orienting women, as well as a shelter for victims of trafficking which provides all kinds of support to victims and potential victims. They also empower them economically so that they are not subjected to exploitation.

A representative from ILO Cairo Country Office also expressed her gratitude to launch the first awareness session for social women leaders. She mentioned that they play a pivotal role in; raising awareness about different national causes, especially the risks associated with the crime of trafficking and its most prevalent forms, as well as how to respond to victims of trafficking and direct them to receive the necessary support and assistance from the relevant national authorities.

A representative from IOM Egypt indicated that this is the first session delivered to social women leaders to raise awareness in their society and develop the community’s understanding to the crime of trafficking in persons. This initiative is launched according to the recommendations announced by the H.E President Abdelfatah AlSisi. In this regards, IOM Egypt continues to provide all kind of support to the social women leaders about the crime of trafficking.

It is worth noting that a leaflet has been produced specifically for the social women leaders and key chains indicating the hotline numbers of the three National Councils. Both were distributed amongst them. The leaflet includes the different forms of trafficking and the mechanisms to respond to victims of trafficking.

These awareness sessions are in line with the the Sustainable Development Goals (SDGs), specifically Goal 8 “Decent work and economic growth,” and Goal 16 "Peace, justice and strong institutions”. It also comes in line with the objectives of the Global Compact for Migration (GCM), Objective 10 “Prevent, combat and eradicate trafficking in persons in the context of international migration”.